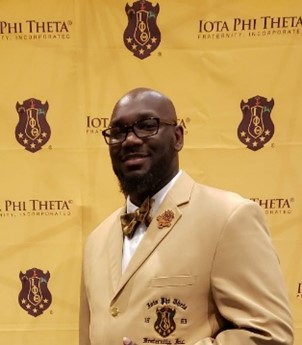 Brother Taylor is a Spring 2001 initiate of Delta Zeta Chapter, Indiana State University. During his tenure at Indiana State Bro. Taylor served as Chapter Polaris, Vice Polaris, Secretary, and Chapter Intake Coordinator. During his senior year at Indiana State, Bro. Taylor became a Life Member of Iota Phi Theta. After he left Indiana State, Bro. Taylor relocated to Missouri where he continued to work for the fraternity in the position of State Director. He was also a charter member of the Alpha Tau Omega – St. Louis Alumni Chapter. Under his leadership, Missouri saw growth in membership and chapters in the state. Adding 1 Alumni chapter, 3 Undergraduate chapters, and the Reactivation of 2 undergraduate chapters in Missouri. After his time in Missouri, his job relocated him to Chicago, IL where he moved back to his hometown of Gary, IN. Upon his return to the Chicago Metro Area, Bro. Taylor was asked to be the Sweetheart Liaison for the Midwest Region. In this position Bro. Taylor helped restructure the auxiliary to be more organized and operate to assist brothers until the transition of Iota Sweetheart, Inc. After this Bro. Taylor became the Indiana State Director where he helped re-build and sustain Indiana. Under his leadership in Indiana, he maintained 2 Alumni Chapters, Reactivation of 2 undergraduate chapters. Bro. Taylor relocated to Houston, TX in 2015. Since his relocation Bro. Taylor has continued to work as Intake Director and Military Affairs coordinator.

In the civilian sector, Bro. Taylor is a proud Elementary Educator for the Aldine Independent School District in Houston, TX. He is a graduate of Indiana University Northwest and West Texas A&M University.

Bro. Taylor has a saying that he adopted from one of his Iota Mentors “Active Financial Membership has its REWARDS!” He remembers the Late Bro. Kenn White would tell brothers this all the time. This has stuck with Bro. Taylor since 4/13/01 has been just that Active and Financial. In his words, he says, “Remember your oath, your promise, and honor it!”