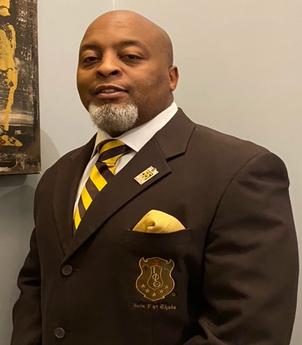 Brother Barnes was initiated into Beta Nu Omega Spring 2011, Fort Knox, Kentucky. Upon his permanent change of station to Fort Gordon, GA, he along with four others chartered Gamma Kappa Omega where he served as the Vice Polaris and Polaris. After retirement from the U.S. Army, he relocated and took his talents to Beta Tau Omega where he is currently serving as the Vice Polaris.

He has a Bachelor of Science from Excelsior College and a double Graduate degree in Management & Leadership and Information Technology Management from Webster University. Currently, he is enrolled in a Ph.D. program (Organizational Psychology) at Capella University.

In his civilian capacity, Bro. Barnes is an IT Specialist, with primary responsibility as a Contract Officer Representative for the Defense Information Systems Agency, Fort Meade, Maryland.

Since being selected by the Director of Military Affairs, Bro. Barnes is assisting the committee with starting several new programs which will benefit recruitment of military personnel, deployed brothers overseas, job placement for brothers transitioning from the US Armed Forces. Brother Barnes's goal is to be a viable member of the military affairs team and continue to improve on the IOTA foxhole.